Artists Need to Create on the Same Scale that Society Has the Capacity to Destroy: Mare Nostrum

Inspired by Lauren Bon’s text-based neon work on view in the courtyard – from which it borrows its title – this exhibition, together with its accompanying public programming, 1001 Stories for Survival, addresses the environmental crisis in the age of climate change, with a focus on the Mediterranean Sea – of particular urgency for Venice, endangered by sea level rise. The show brings together over 73 artists of different generations and cultural backgrounds whose selected works, in a wide range of media, invite critical awareness on the fragility of nature and human life while poetically invoking the regeneration of living systems.

In the central space of the church, Wolfgang Laib’s Passageway (2013) sets the exhibition’s prevailing meditative tone as it offers a poetic rumination on the human being’s fleeting journey in life. Lauren Bon’s site-specific installation Inverted Mediterranean Pine (2019), made of steel, papier-mâché, and painted with carbon sourced from the recent California wildfires, is poised over a pre-existing hole in the church floor, revealing the foundation and water beneath. Bon’s sound-scape, Oratorio Mare Nostrum (2019), connects the lagoon and the moon cycles in a layered aural map of the Mediterranean Sea. Her sculpture St. Jerome’s Study (2007), comprising a desk, books, and objects covered in tar, recalls themes of translation and obliteration, while drawing attention to the threat of oil spills on our sea. Shoja Azari and Shahram Karimi’s video projection on painting, Untitled (Meditation on water surface) (2007), invokes a quiet moment of contemplation. While exploring the relationship between nature and technology, Julian Charrière’s new work from his ongoing series Metamorphism (2016-2019) poignantly amplifies the subjects of ephemerality and transformation. Shirin Neshat’s video Sarah (2016) creates a physical and emotional landscape, where the relationship between Woman and water is powerfully brought to the fore.

Present with its staff during the course of the exhibition in a dedicated space (Sale delle Colonne, whose entrance is just next to the Church), the New York- based Brooklyn Rail journal – a radical and free publication – re-creates its “social environment” in Venice. Presented within the Brooklyn Rail’s working space are Phong Bui’s portraits In Conversation #1 (2011-2019), as well as The Wall of Offering: To Venice With Love, an altar-like installation of paintings, drawings, photographs, and sculptures by a wide range of established and emerging artists. Among the works included are Kiki Smith’s Singer (2008), a sculpture of a young woman holding a bouquet of flowers, and Lauren Bon’s Honey Collection from the Environmentally Endangered Mediterranean Countries (2007-2019). Also in this space are Justin Brice Guariglia’s Exxtinction (2019) and Newton Harrison’s A Meditation on the Mediterranean (2019) alongside his Book of Lagoons (1974-1984), which visitors are invited to flip through.

On view in the courtyard is Lauren Bon’s neon work Artists Need to Create on the Same Scale the Society Has the Capacity to Destroy (2019), as well as Maya Lin’s Water Water Everywhere, Not a Drop to Drink (2019), a site-specific installation of blown-glass dew droplets, poetically encapsulates the theme of water. The courtyard is also the site of performan-ces: during the opening and closing receptions, Rirkrit Tiravanija, Tomas Vu, and Sarah Sze will stage their cooking performances using multi-functional cooking and ping-pong table by the artists that remains on display in the courtyard. 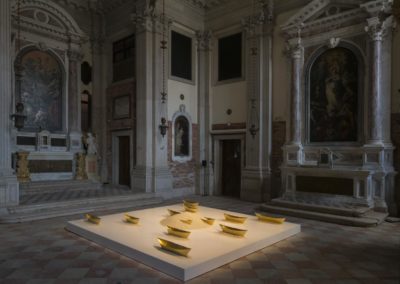 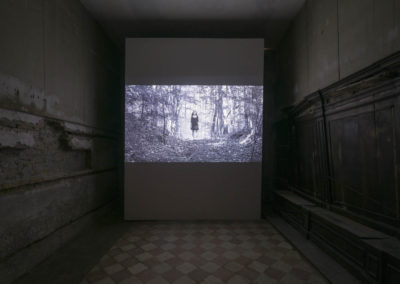 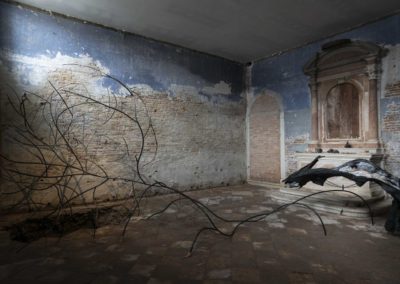 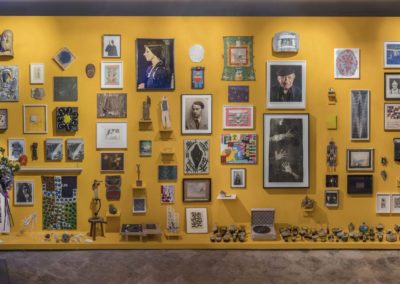