In a study of 1984, art historian Bernard Aikema focused on some versions of Saint Jerome in Prayer and Saint Jerome in Penitence that Lorenzo Lotto painted during his long and fertile artistic career, suggesting that the Saint Jerome in Prayer now at the Museo Nacional del Prado in Madrid had been commissioned by the Ospedaletto fathers to complete the altar of the chapel that had been built inside the complex in 1528, but that up to 1546 had remained with no decoration.

We know that Lotto’s relations with the Ospedale dei Derelitti were very close from the outset: the painter was in fact a member of the Governor’s Congregation and, as documented by the artist’s will of 1546 conserved in the I.R.E. Archive, it was his wish to leave all his possessions to the Ospedale. In consideration of these facts, the commission of Madrid’s Saint Jerome in Prayer from Lotto seems quite likely. Certainly of interest is Lotto’s choice of the subject for the panel, since Saint Jerome was a theme he explored on many other occasions throughout his career.

We here take the liberty of adding this Saint Jerome in Meditation from I.R.E.’s rich art collections to the series of Lotto’s takes on the Saint’s life – a painting whose authorship is not confirmed by any record but that for some scholars should be ascribed to the Venetian painter.

Unlike the Prado painting – where we see the hermit Saint Jerome in deep prayer, somewhat overcome by the vastness of the surrounding desert landscape – the I.R.E. painting places the Saint against a dark rocky backdrop at the centre of the canvas, in the act of transfixedly staring at the large Cross in his left hand and of punishing his flesh hitting his chest with a stone he holds in his right hand. Focus on the penitent aspects of the Saint’s life returned to the fore in the first half of the sixteenth century, in keeping with the new moral requirements advocated by the Venetian reformed religious movements that in the convent of Santi Giovanni e Paolo, next door to the Ospedaletto, found one of its liveliest centres. The close proximity of Ospedaletto to the convent might be read as a circumstance supporting the attribution to Lotto of this marvellous and finely-executed painting.

The very detailed, almost Flemish-style depiction of the Saint’s features registers every finest aspect, and the deep wrinkles across the old man’s forehead offer an interesting contrast with his still vigorous and athletic body. The colour palette, played on shades of white and pink, is lit by the Saint’s red loincloth and then again toned down in the opaque ivory white of the macabre skull. 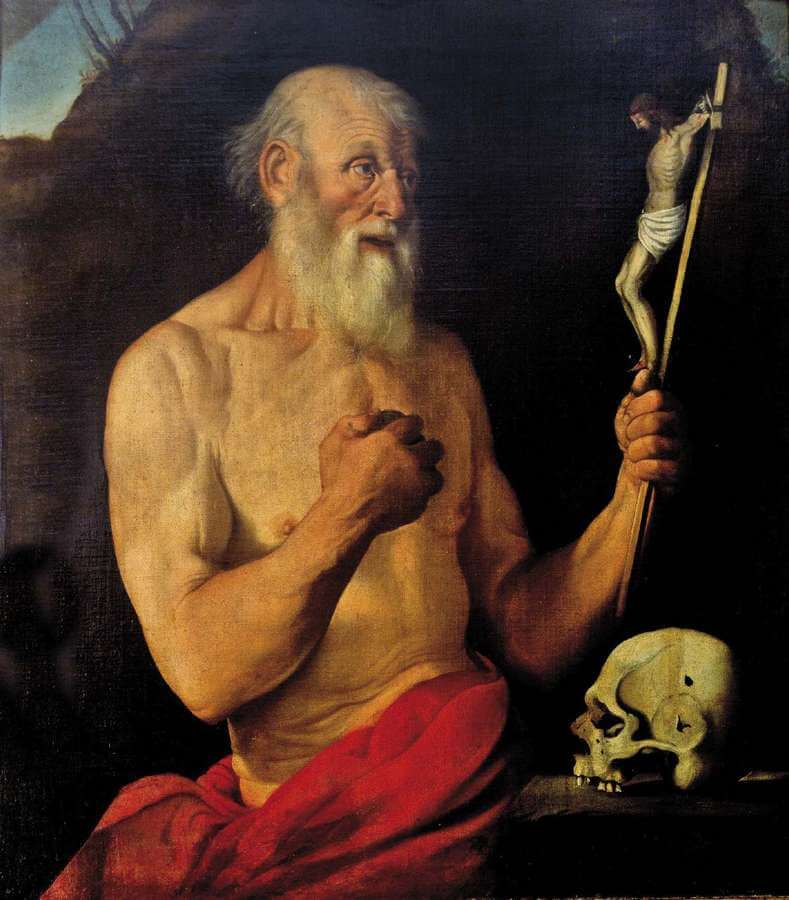